Some say LOS* is Dead.   Its Not.    Here's why LOS is more important than ever---
*LOS = Level of Service, a metric use for ranking traffic congestion

Traffic Conditions in Pasadena, CA like so many other cities in California, keep getting worse as traffic continues to grow, and mitigations of major projects instead focus on providing bike and pedestrian facilities.  ​Such is the consequence of using only Vehicle Miles Traveled (VMT) instead of Level of Service (LOS) to measure traffic impacts.  ​

Safety above all else, has got to come first.  We now have a crisis of safety, as cars go ignored. 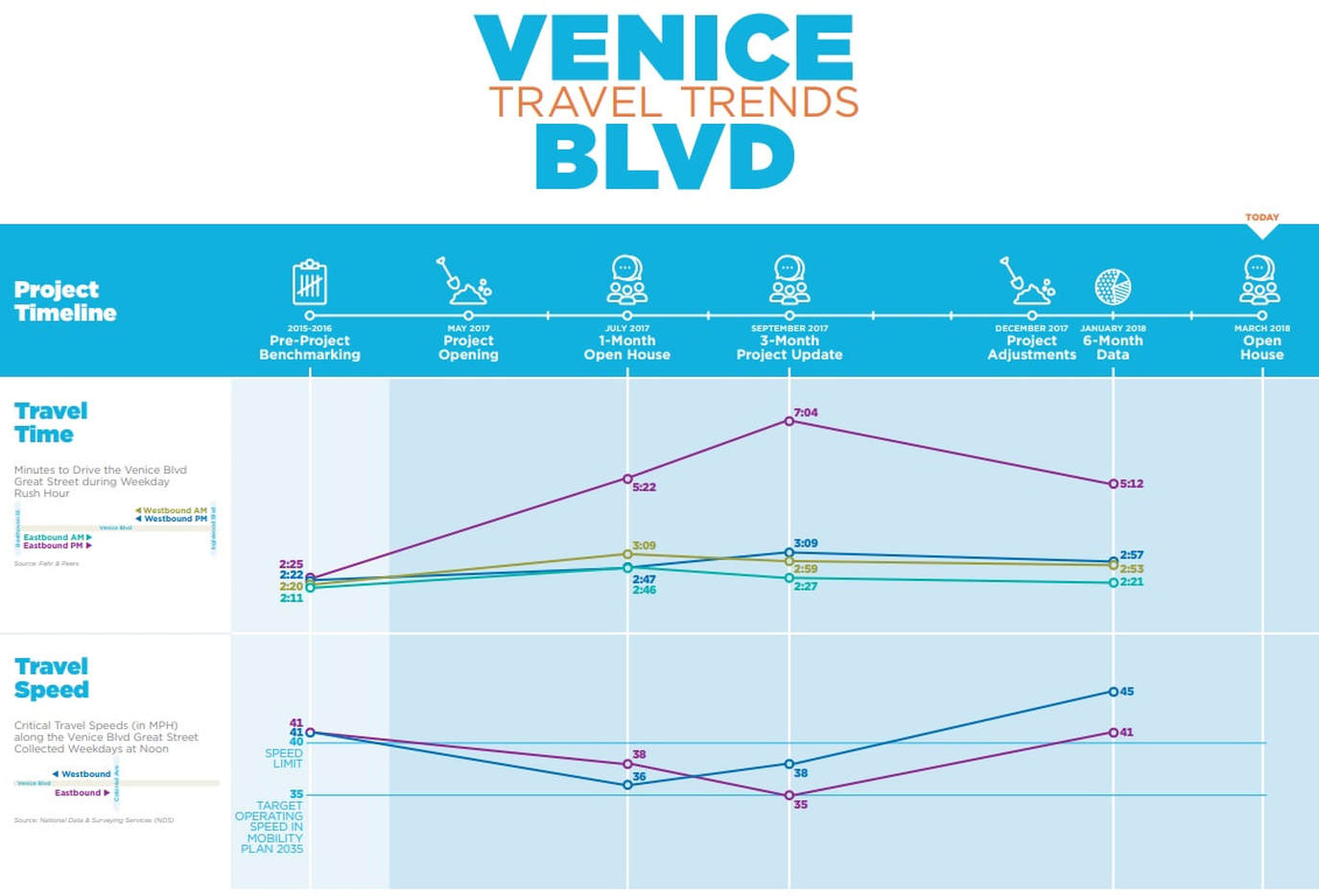 What Happened Here?  Why did the Complete Streets Road Diet Fail?

SAFETY was not considered FIRST.  Social Engineering was attempted, and there was no regard to an already LOS F condition for cars.  Making LOS F twice as bad by taking away 50% of the lanes is not a good idea.  Public Workshops were also said to be more of a formality than a real exchange of ideas and concerns, because there was no discussion with the public.
​        There are in reality, only a relatively few streets in existence today that can truly benefit from a Complete Streets Road Diet because most streets are already saturated with vehicles, this one was over capacity at 37,000 ADT and two lanes were removed!  You can hardly fit 20,000 ADT on a two lane road, let alone 37,000!  There is no other better place for them to go by doing this.  It won't adjust correctly in the system.  If you constrain a busy corridor so that it goes from 4 lanes to only 2 lanes for vehicles, you have cut the roadways capacity in half, and this has serious ramifications.  This will cause drivers of vehicles to find alternative routes, and many of these alternative routes are going to be residential streets.  The result is the volume of traffic on a road on a "Road Diet" is going to go DOWN... of course it will.  Its going to go somewhere else, not disappear!  And this will result in a loss of exposure to store fronts of merchants who relied on pass-by traffic. Venice Blvd traffic went down 30%, that's 30% less exposure. This leads to loss of sales, and it will lead to a loss of the business entirely in some cases where profit margins were tight to begin with.  So we have these unintended impacts/consequences that seem to make things better for cyclists and peds, but worse for merchants and local residential streets.  I say seem, because pedestrian fatalities in LA have nearly doubled in the last two years, not come down.  It is, by the numbers, NOT safer for pedestrians in LA.  Some Road Diets on over-capacity streets are merely pushing the traffic to other streets, because the cars are not going to go away.  In fact, in the USA, car ownership is still growing per household, up to 91% now from 87% in 1980.  People have grown to RELY on their vehicles to get around, and this trend is growing not only in the USA, but in China too where car ownership is literally exploding (where it used to be only 10% of the population that owned a car, now it is jumping towards 20% and still growing, doubling their already congested traffic).  This demand for CARS should not be ignored by transportation planners who have sought ideas to try and get people "out of their cars," but it has not been successful in doing that.  This experiment has been taking place for about a decade now, and it is not changing the landscape overall.  The opposite has been happening.

Cars Per Household for U.S. Cities Map (almost all ratios go UP in 2016)

It is obvious why ped fatalities are UP.  It doesn't take a Traffic Engineer to figure this out. 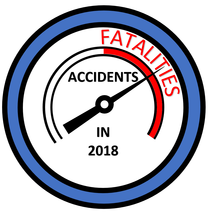 The reason why the number of pedestrians being killed by cars has increased (doubled!) in Los Angeles, is because citizens are being encouraged to walk more, but still in places where there are still cars moving at 45 mph, but now on a "Road Diet" and now driven by drivers even MORE in a hurry, because their travel times in the corridor have doubled as a result!  The statistics in the United States indicate that there are more instances where a pedestrian can be killed by a vehicle (more pedestrians on the road now), and so it is happening.  In China, they have 10 times as many fatalities as we do in the USA (400,000 killed each year versus USA at 40,000, but SAME number of cars on the road, similar miles of road too).  Most of those killed in China are pedestrians, there are so many on the roads, and they are vulnerable to mortal danger with fast moving cars.  Many transportation planners in the USA and elsewhere have been advocating for getting people out of their cars. The presentations have been colorful and informative, but in cases where public comments were not allowed, these have been contentious meetings.  The safest place may be after all, IN one's car, where there is a seat belt, an air bag, and tons of steel protecting occupants from impacts.  The statistics for Los Angeles speak for themselves.  Pedestrian fatalities have nearly DOUBLED.  It is time for transportation planners to give some pause as to whether their ideas have been working, or failing.  Find out what is working, and accept what is not working.  Truly have the smart growth we all want.

PRISM Engineering advocates for common sense improvements to our transportation system.  We need to consider the psychology of people, and consider their comments and opinions.  We need to consider the culture as well, and what kind of result happens when solutions are more or less forced upon constituents who still need to get from point A to point B desiring as little delay as possible.  Demographics in transportation in the USA are not like China, at all.  It is very different when you have 85% of the people walking to and from transit, or just walking, and the other 15% use a car.  The US population is only 1/4 of China's 1.3 Billion people, and the ratio of pedestrians to drivers of cars is so significantly different.  They walk a lot in China, in the US not so much.  Suburban and even urban suburban is the reason, things are more spread out here (excepting in very large China-like cities like SF, LA, Chicago, and NY).  90% of US citizens don't as a general rule, live in skyscraper saturated huge urban centers, so they rely more on cars to get around.  Cities like Hong Kong have only 7% of their population who drive cars, and the rest walk, and some of these ride the transit systems.  But their pedestrian fatality rate (12 fatalities per 100K vehicles) is 6 times that of the United States average!  And two times that of Los Angeles (the city in the USA with the worst pedestrian fatality rate at 6 deaths per 100K vehicles).  Why is Hong Kong so high in fatalities?  Precisely because there are so MANY pedestrians, and the risk is so high.  Only 7% drive, the rest cross streets to get where they are going,  Someone is going to occasionally step in front of that car or truck or bus, or the driver won't pay attention, with a much greater frequency than happens in the USA.  So we can plainly see this correlation, especially since the street systems in Hong Kong look very similar to those in San Francisco, with trolly cable cars, buses, taxis, and lots of pedestrians (although there are MANY more pedestrians per capita in Hong Kong than in San Francisco).  This is what leads to the death rate being so high.
The street systems of these two large cities look and feel similar.  However, Hong Kong 香港 has a numerous population of pedestrians using their system！
Transportation Planners need to reconsider the idea that through modifying very busy roads with diets that they can achieve Vision Zero.  We can see by stats that in the US people are not abandoning their cars.  The trends in the last decade show an increase in US vehicle ownership, and in certain places where Complete Streets Road Diets have been installed on over-capacity road against the wishes of the local citizens, these have shown to increase pedestrian fatalities.  This happened last year in Los Angeles. The facts are speaking.  It's time to reconsider some of the approaches that have become so popular in this past decade.  It is time to more appropriately apply Complete Streets.

In the following maps from various SF City websites, we see where pedestrian fatalities are taking place (left map, blue X = PED Fatality), and we can correlate this with the map on the right which shows where Complete Streets Priority Segments have been identified and implemented... and those are the red lines, or high priority segments.  Many of these fatalities are STILL taking place on roads that are the red lines (priority roads).  It is logical to conclude, with this information, that the Complete Streets policies and decisions here have not been moving the needle of pedestrian fatalities in any significant way, as the accidents continue each year.  Even the chart below shows that in 2017 SF had MORE pedestrian fatalities than they did in 2009.  So far after a decade, this is not a trend that will achieve "Vision Zero" anytime soon, let alone by 2024 as per their goal... but it is showing that the needle did not move much either way for fatalities.

So What is the Solution to this?

In the mean time, SUBURBAN GROWTH SURGES in 2017, and urban Skyscraper digs are shrinking

I have friends who are moving out of the Bay Area in Northern California, frustrated at what they call GRIDLOCK because they say they can't easily drive around without getting frustrated.  Many of these are selling and moving to the hills where it is peaceful, quiet, and where policies have not made things unfairly worse for drivers of cars.  A suburban migration IS happening. Its where the new homes are.

This graphic shows that in the USA people are electing to buy suburban places in much higher numbers.  Transportation planners need to consider if current policies are having the desired effect, and how the masses affected have been reacting. Are people MOVING OUT of the dense urban cities because the GRIDLOCK is not tolerable? Are the delays high and aggravating, and yet stats show people are NOT giving up their cars to ride a bike overall in the US?  The statistics seem to indicate this since there has been a growth in vehicle ownership, now up to 91% per house versus 87% a few decades ago.   The bicycle demographic is a lifestyle, one that is a small percentage of the total, precisely because of suburbia and long trips from point A to point B.  There ARE solutions that don't include trying to shift modes, get people out of their cars, etc., it involves better Traffic Engineering solutions to keep traffic moving, keep it safer, reduce interactions of pedestrians and bikes with high speed cars (more separations), and better transportation planning... putting homes and businesses where they belong, minimizing traffic impact with a better jobs/housing balance.  Easier said than done.
go to traffic engineering services